The Crystalis for Change livestream has come and gone. Sadly results were much less than expected. If you enjoyed the broadcast and would still like to donate you can here. 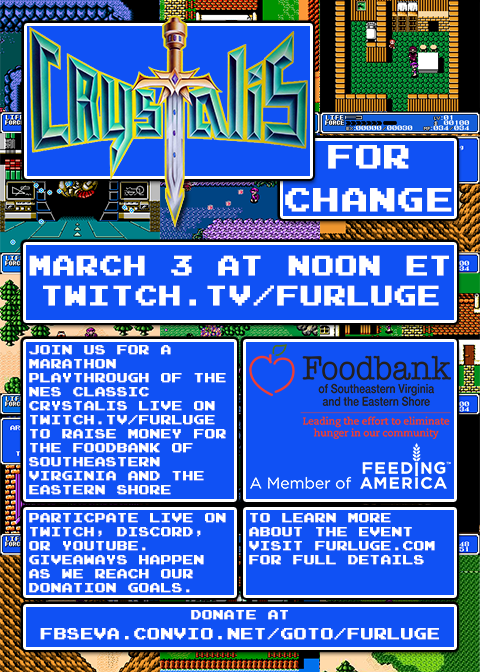 I am happy to announce that on March 3rd, 2017 at Noon Eastern Time on twitch.tv/furluge will be hosting a charity live-stream with all the proceeds going to the Foodbank of Southeastern Virginia and the Eastern Shore. As some sharp-eyed viewers of the channel may have noticed the Twitch.tv channel has recently topped over 300 followers so we’ll be doing a marathon stream to celebrate and raising as much money as we can for the Foodbank in the process. We will still of course also be broadcasting at youtube.com/furluge and the discord channel will be up at discord.gg/vs8PV for anyone who would like to chime in for any words of encouragement for what is expected to be a 10-15 hour session. In the unlikely event Crystalis is finished too early it will be followed up by Crystalis on the Game Boy Color.

Our donation goal for this charity drive will be $1,000. Live on stream we will be holding prize drawings for Steam wallet codes when 25%, 50%, 75%, and 100% of the $1000 donation goal is reached. Anyone who donates will be entered into the drawing. Previous winners will be removed from later drawings except for the 100% donation goal drawing which will be available to all previous donors regardless of previously winning.

If you are are unfamiliar with the Foodbank of Southeastern Virginia and the Eastern Shore you can visit their at webpage foodbankonline.org. The Foodbank is a tax-exempt organization distributing emergency food to over 400 Partner Agencies and Programs including soup kitchens, food pantries and emergency shelters along with our Mobile Pantry, Kids Cafe®  and BackPack Programs. They have are Charity Navigator 4-star rating. Every $10 donation allows the Foodbank to distribute up to $60 worth of grocery products to those struggling with hunger. If you would like to donate in advance you may goto the donation page right now at fbseva.convio.net/goto/furluge.

My Tweets
Join 30 other followers