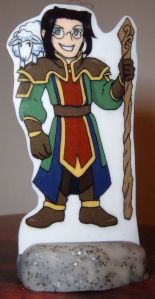 Ello. My name's Horatio, Horatio Harpell, but my friends call me HH. Would you like to be my friend?

Horatio Harpell is the name of my Wizard Character in the RPGA Living Forgotten Realms campaign. Horatio is a fun, light-hearted character that lends himself well to a wide variety of jokes and 4th-wall-breaking jokes. Horatio is based in the themes of the Harpells as described by R. A. Salvatore and described in “The North” book for Forgotten Realms written for AD&D. So are these Harpell fellows and why is this important? Here’s what “The North” has to say about the Harpells.

Because of the ranching trade, the ranchers would control Longsaddle, were it not for the capricious, magically mighty Harpell clan. For generations, the Harpells have brought Longsaddle an importance in the North far greater than its size and purpose would warrant. The Harpells are mages and members of the Lord’s Alliance. This tradition began with mighty Authrar Harpell, who was famous in the North an age ago for single-handedly destroying an onrushing orc horde with spells. More recently, Malchor Harpell, along with his Company of Crazed Venturers, supposedly fought off a demigod. On another occasion, fighting alone, he destroyed two Red Wizards of Thay and the undead beholders under their command. … Folk who travel the North think Longsaddle is a place where extra care must be taken because magic is hurled about everywhere.

Longsaddle is dominated by the crazily chaotic bulk of the Ivy Mansion. The ancestral home of the Harpells perches on Harpell Hill in the center of town. The Mansion is a collection of three buildings.

The first is a constantly expanding building of ongoing tumults of experimental spells going awry, incorrectly mixed potions exploding, magical pranks, and a carefree collage of ideas and experiments added to by each successive Harpell. The hodgepodge construction of the Ivy Mansion results in innumerable strange angles in the walls and roof, dozens of spires with no two alike, and thousands of windows.from tiny slits to huge openings. Inside are a dozen alchemy shops, scrying rooms, meditations chambers, and conjuring rooms. Few are allowed to visit the mansion, and fewer see more than the central dining and meeting room. This room is a domed, circular hall, known as the Fuzzy Quarterstaff. Here, there’s a central hearth and chimney surrounded by feasting tables and a bar with an animated orchestra.

Two buildings seem to be ordinary low farm buildings, but that’s hardly the case. The smaller serves as a stable of miniaturized animals kept in cages stacked to the ceiling. The second is an experimental farm where other reduced animals graze in an open central area.

A fence appears to surround the hillock compound, but in fact it is an invisible wall with the fence painted on its surface. Only the third post left of what appears to be a gate is real, and the actual gate is found there. To reach the stable, one must pass along the mansion and cross the strange stream climbing the hill, which becomes momentarily invisible, and flows down the other side. A bridge with a reverse gravity beneath it provides a path to the farm buildings via the “underbridge,” returning via the “overbridge.”

All of this is of course written before the infamous “Spellplauge” event that effects 4th Edition Dungeons and Dragons and advances the story 100 years. As of now nothing has been written as far as the fate of Longsaddle, so Horatio is based out of the Lurar region. He is easily identified by his capricious, almost childlike and naive nature, his (poorly rendered) british accent, and his habit of greeting everyone new he meets with the phrase, “‘Ello. My name’s Horatio Harpell, but my friends call me HH. Would you like to be my friend?” In game mechanics terms he is a staff wizard with a stupidly high armor class which now has no other purpose but to make other players balk at it’s absurdity

You may have noticed that Horatio has a small sheep on his shoulder. The sheep is Horatio’s familiar named Doris. Doris is a “minimal” as described in “The North”

The Harpell family is experimenting with shrinking animals to miniature sizes. They hope to breed them as stable species at the smaller size, to allow for maximum food use and minimal feed consumption, enlarging them shortly before the slaughter. A furious private debate is currently raging within the family over the morality of such tampering with natural forces, but the research continues. To this date, few of the results, known as minimals, have been released onto the market.

As a familiar though, Doris is more than simply a teeny-weeny sheep. She has been enhanced been uplifted by magical spells and has the ability to think intelligently, to be understood by Horatio, and to teleport to a demiplane, filled with rolling pastures, fences, and other sheep preoccupied with jumping, when attacked. In game Doris has been used to scout ahead, wow people with her color-changing wool, and generally make players and NPCs alike wonder why a giant talking cotton ball is on the wizard’s shoulder.

Fun events from modules, quips, phrases, and other odds and ends about Horatio that have happened in game.

This is one of the very first videos I ever created. It was even done before my Insects Infestation video, and for the longest time just simply wasn’t up on youtube. Eventually it did find it’s way to Youtube for all of you to enjoy. This video shows my first City of Heroes character going from levels 1 through 50 put to “Charging the Megabuster” by Spirtual Tazer. Video footage is from Issues 3 to 4 of city of heroes, placing date of the footage in the year 2005. As a special treat this video is filled with annotation which identify where and when the footage took place. It should be a trip down memory lane for anyone who enjoys City of Heroes, as it harkens back to a day before Jackets, before body sliders, before ED, before Villains, before a whole lot of things. But not before capes and Kheldians. Definitely not before then.